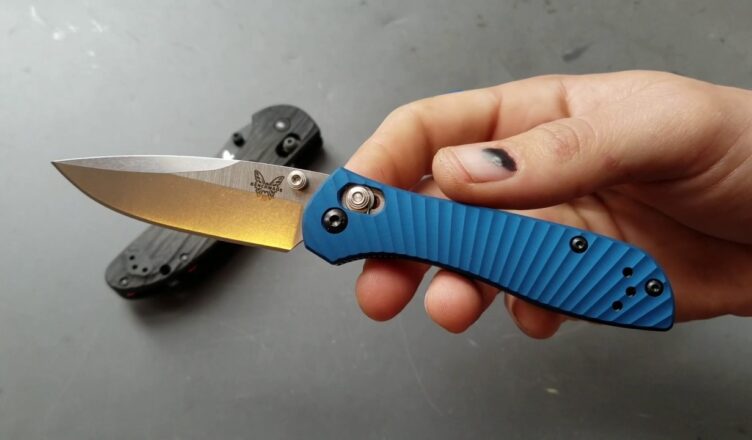 First thing I asked myself, when this knife arrived for the review was, ‘Sequel to what?’ I mean, Spyderco Delica is the sequel to Endura, Ontario Rat 2 is a sequel to the first model, Benchmade Griptillian has a smaller brother too. I had to get to the origins of this peculiar little blade so I went online and did the obvious. It appears that Benchmade 707 is the successor of the knife first ever employing the Axis-Lock mechanism – the Benchmade 710. Designed by McHenry and Williams it bears literary the same handle shape but a completely different blade and scales material. Not to mention the size and other features, that I am about to reveal.

The Benchmade 707 Sequel is a great knife for backpacking. It is strong, lightweight and capable of handling light cutting chores with ease. It has very solid feel, due to the aluminum handles and overall sturdy design.

So the knife itself comes in a typical blue Benchmade box with the butterfly logo on it. It is made in the USA, has a lifetime warranty. The average price on Benchmade Sequel is about $150. Surprisingly – this is not a blade with a substantial price range, so I guess that’s about to be it. Now, the boring ‘numbers’ section. Benchmade Sequel has the overall length of 6.75 inches. It is 3.80 inches closed and 0.420 inches thick. The knife weights 2.60 ounces.

Benchmade Sequel utilizes a little 2.95 inch blade, which is just fine for the law in most states and countries. It is a modified drop point with flat-slash-saber grind and quite a swedge. Which is perfect for piercing and gutting open the cardboard packages. The slicing is fine, considering the blade steel. Although it could be better with a full flat grind, the already mentioned shape works fine with me. I guess sometimes you just have to sacrifice functionality in favor of the overall look and design. What else? There are two pins for ambidextrous opening. No gimping here – this is a gentleman’s knife, not something you might combine with the tactical urban pants and such. Anyway, let’s move to my favorite knife-steel section.

The blade steel on Benchmade 707 Sequel is 154CM. It is the same kind of stainless steel they use on Benchmade 530, Kershaw Launch and the whole Emerson model line. In fact I’ve already written enough about it in my previous article on the Mini Griptillian. But, as they say – repeating is learning. So the 154CM steel was first manufactured in the United States by Crucible Materials Corporation. It is basically a modified 440C with added 4.00% amount of molybdenum. Being originally developed for tough industrial applications, 154CM steel can really take the beating. So, like with the Griptillian – you shouldn’t mind using the knife for wood cutting and other hard tasks.

The blade comes, as usual, razor sharp from the box. Benchmade really know how to sharpen their knives. So even if your 707 Sequel dulls with time, you can ship it back to the factory for the professionals to do the job (they call it Lifesharp Service). Or you can take the all-praised Spyderco Triangle and hone the cutting edge yourself. Either way – the steel gains sharpness pretty fast, so no troubles here again.

The handle material is probably my most favourite part of the knife. Getting back, with Griptilian you could do some average daily tasks without seriously torturing the knife. All thanks to the lightweight FRN handles that are tough… But not as tough as the skeletonized steel liners the Sequel has. Although the liners are not inlaid, the handle is less beefy than that on a Griptilian. The scales are made of 6061- T6 aluminum with G10 sections that look just fantastic. Thus what you get is a strong, tough construction worth beating. And, yes, if you ask me – I have tried this knife on the outskirts of town, chopped some wood with it, and was pleased. The handle grip is superb.

It is actually funny how a small knife like Sequel does the job of a full sized blade. But again – we are now talking about the fathers of the first Axis-Lock knife. And when I say ‘fathers’ I don’t mean the average designers, who THINK their knife will work. These guys actually KNOW that the design will work.

And it does. Even shrank to such a small size, the Sequel like any other quality knife will serve its purpose long and good.

I’ve been using this knife for like a month already. What can I say – it is truly another gem in the Benchmade crown. Yes, it is costly, yes it is small and yes you are going to enjoy beating the crap out of it. Literary! However let’s not make a hustle and just go through the main benefits of this blade, ergonomics-wise.

The pocket clip on Benchmade Sequel is a full size arrow head. The knife can be carried right or left side tip up only. The belt clip is not deep carry, although for a knife this size I wouldn’t like digging up my pockets to find and take out the blade. All in all – the clip is comfortable as it is. Stiff and long, it works fine so the owner can sleep tight and worry not about losing the knife.

The locking mechanism on Sequel is standard for most Benchmade switch blades. Needless to say, it is obvious that Axis-lock moved from the older McHenry and Williams’s model to this small fellow here. And I like this lock. It is fun to play with, it is strong and it holds the blade in its position. What else is there to look for in a pocket knife? Well yes, it is not the kind of mechanism you would use in the forest. Because mind this – dirt and debris will find their way into Axis-Lock. Cleaning it out is not a problem since the overall construction is demountable. But again, Benchmade Sequel is a gentleman’s blade for suburban tasks, so why bother.

The deployment is superb as ever. You can flick it open with ambidextrous thumb studs using your fingers. You can open it by de-pressing the locking mechanism and waving Sequel open. Same goes with closing. I mean you all know how Benchmade knives work once you hold them in a shop. Besides, the knife operates on bronze washers that go fine and smooth with the blade. It is just comfortable deploying Benchmade Sequel and that is it.

All things considered, Benchmade Sequel is not a big, but reliable, American made, gentleman’s pocket blade with a great potential. Considering its stylish look I wouldn’t even think about buying a similarly bigger brother of a Sequel folder. And if they say, that the Evil Dead 2 is a much better film next to theoriginal part, I say – choose Benchmade Sequel, because it is a much better knife next to the original one.