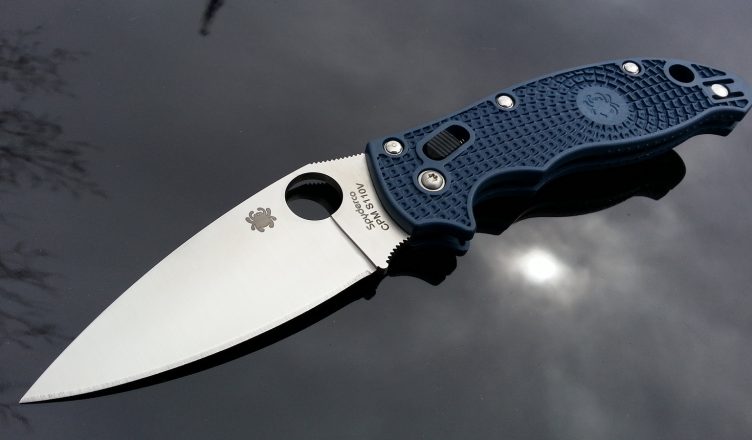 Ok, so what we have here is another perfect EDC knife. Like all Spyderco blades, it is comfortable to use, it is sharp as hell and so on and so forth. However, it occurred to me that most people can’t say exactly what they like about the knife. Recently I’ve been talking to a friend of mine, who gave the knife for my review, and he just said he loved the overall aesthetics of Spyderco Manix. Well, he is right, but there is definitely a lot more to say about this cool pocket knife. Read on and discover why Spyderco Manix is actually worth your attention.

Spyderco Manix arrives is a standard company’s packaging (a box). It has the overall length of 8.49” and weighs just about 5 oz. Like all American Spyderco knives, Manix is made in Golden, state Colorado, planet Earth (as they tend to acknowledge users on the blade). The designer of this here guy is the son of the genius knife maker – Eric Glesser. This is the second generation knife of the Spyderco Manix line and presents not only a slightly changed handle shape, but a new patented Ball-Bearing lock design.

The blade length on Spyderco Manix 2 is 3.4″”. It has modified drop point shape that looks like a leaf spear point. Or a sheep-foot… I mean you are never confident about the actual naming on Spyderco knives’ blades, because they are unique. Anyway, the knife features full flat grind on the blade so, again – no worries about its cutting potential. I’ve been using this knife for daily routine chores and had no problems whatsoever. Cutting paracord, cardboard, linoleum, plastic, you name it. It just goes through any material. That being said, Spyderco Manix is the main outdoor pocket knife my friend uses every time he goes beyond city limits. And that is the thing he does a LOT. Feather sticking and wood processing? Check and check.

The steel here is S30V. Same steel used on the legendary Paramilitary and Military models. S30V was developed by Dick Barber (Crucial Materials Corporations) and Chris Reeve, whose heritage I need not mention. According to Buck Knives it is “the absolute best blade steel available”. It contains vanadium carbides which are harder than chromium carbides. Thus, providing superior toughness and edge retention. Sharpening the blade of course takes some time. But once sharpened, it is holding the edge for a time exceeding that of other steel blades. It goes without saying, that S30V is a true premium class steel which affects the price point of knives severely. However, considering all the bonuses you get, buying the knife like Manix 2, it is definitely worth its price.

The handle on Manix 2 has G10 scales with stainless steel liners. Quite a standard combination, however, performed with Spyderco’s attention to details, gives this knife good look and firm grip. The texturing on G10 is not aggressive. It is medium and similar to that on a Tenacious model – just enough for the excellent grip and tactile feeling. Needless to say, the G10 material is extremely scratch resistant and shock absorbing. So you can drop the knife as many times as you want – it just takes the blows and stands tall.

The only contradictory detail I found about the knife is its liners – just two solid pieces of metal screwed to the scales. They are not skeletonized, which means more weight for you to carry. On the one hand this makes construction rock solid, adding a slight tactical flavor to the picture. On the other hand

Spyderco made the Lightweight version of Manix 2 with skeletonized FRN (glass reinforced nylon) handles to make it more rigid. The truth is always out there on the forums. Besides it is not a problem to find thousands of Spyderco Manix 2 pictures with custom drilled scales. So, I would say, Spyderco just made the room for those weight-crazed people to play with. And for regular users this means just less time getting debris and other trash from the drilled sections of the handle, none of which you’ll find here.

Another thing worth mentioning is the gimping. And it is just everywhere. Spyderco Manix 2 has ridges on the thumb ramp, inside the handle and choil of the blade itself. Once deployed, the knife just sits in your hand (with or without gloves) and is going nowhere. So, again, you can of course drop the blade accidentally. But the job might appear as hard to accomplish, as the blade to dull (nuff said).

Now the ergonomics part. Man, I really loved using Spyderco Manix 2!!! The way it is deployed, the pocket clip, hell, all Spyderco knives have it. And it is called – superior ergonomics. However, let’s just cover all the tasty details step by step. Spyderco Manix 2 has a standard belt clip. You saw it on Paramilitary, Endura and many other Spyderco knives. Personally I consider it to be the best pocket clip ever created. It has just the right amount of tension to be attached to the pocket and stay there for good. As funny as it may sound, this occurred to me recently when I was hanging head down on a rope trail. Manix 2 didn’t slip from the pocket, although it could happen with any other blade, considering its weight.

The locking mechanism is the patented Ball-Bearing lock. Benchmade have their Axis-Lock. Well, thought people at Spyderco, it is time to come up with something more innovative and simple. Long story short, ball bearing lock is something that works similarly to Axis-Lock but is, mechanically, a completely new type of lock. It operates with a ball “caged” inside a moving chamber. So the two things holding blade are the ball itself and the stop pin. A lot could be written on how it operates and functions. But when people say it is rock solid, they do mean it. There is literary no blade play, when being deployed. The ball just blocks any movement and isn’t it the feature we’ve been all waiting for? Well, yes there is the acclaimed Tri-Ad Lock, but we are talking Spyderco now. And of all the Spyderco knives – this one probably has the strongest lock.

The deployment is simple. No dual thumb studs here – you can flick the knife open in a million ways. With the middle or index finger, with a thumb or by depressing the lock – playing with Manix 2 is something you are going to do a lot. Because it is fun, and another thing you should expect from an EDC blade – the versatility of deployment.

All things mentioned, Spyderco Manix 2 is really a chubby EDC kind of blade. It is not a lightweight knife however its stiffness and reliability are beyond what any other Spyderco product can offer. So if you are looking for a quality knife with premium steel and quality, Spyderco Manix 2 is a blade worth considering.